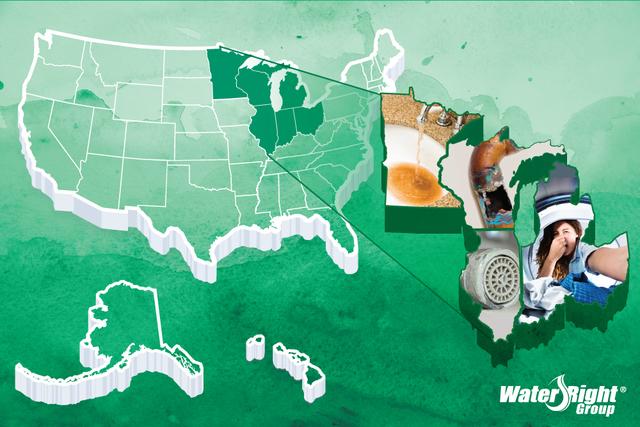 The largest source of freshwater on the planet is found in the Great Lakes. But, just because there’s a large supply doesn’t mean homeowners don’t have water quality concerns. The water treatment experts at Water Specialties Group have plenty of experience working with problem water around Illinois, but we've asked our partners at Water-Right (the manufacturer of Evolve series products) just how far these common water issues spread.

We spoke with three of their regional sales managers: Mark Selvig, Mike Speicher, and John Degeneffe, to find out about typical issues in the following states:

The Upper Midwest experiences a wide range of water problems and there can be distinct differences within the same state. Mark Selvig and John Degeneffe both work in the state of Wisconsin where they list problems including basic hardness and iron issues as well as different pH levels in the water.

“In Western Wisconsin, we run into low pH conditions,” says Selvig. “A pH of 7 is neutral and anything below that is considered acidic. In this region, we see pH get as low as 5. Water with high acidity is detrimental to your plumbing. It will slowly eat away at copper pipes causing what we call ‘pin-hole leaks.’” 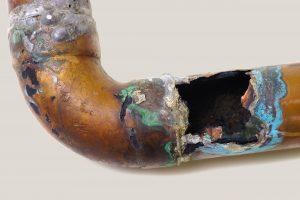 Speicher said acidic water can be an issue in Upper Michigan too, and Degeneffe adds that he finds it in Northern Wisconsin as well. However, water that is more alkaline will cause other problems because of the hard minerals that are present.

“In the northern part of the state, where there’s low pH water, hardness is not as much of an issue,” Degeneffe explains. “In the southern half of Wisconsin there’s lots of hardness, anywhere from 12 grains to 110. That’s how much it varies.”

A water softener is the best solution for dealing with hardness from calcium and magnesium. However, because hardness levels vary, you still need someone who understands how to set up the softener to work properly on your home’s water. Plus, removing dissolved minerals may not solve all your water problems. Speicher recently visited customers who tried a DIY water softener installation, but they weren’t satisfied with the results.

“They put a water softener in and thought it was going to take care of everything,” he says. “But, the softener wasn’t taking care of the iron, so they called us wondering why they had iron bleed through.”

Because there are such wide discrepancies, even in the same part of a state, we always recommend finding someone in your area who understands the intricacies of how water is best treated.

“Water is a very local issue,” says Selvig. “If you truly have water quality concerns, you need to find a local professional. The big box stores are good at what they do, but I always like to work with a localized expert.”

“What might work for a certain type of problem water in one part of the country may not be the right solution in another region, even though the parameters are nearly the same,” Degeneffe says. “For example, the way you treat tannins in Wisconsin is very different than how they’re treated in Florida.” 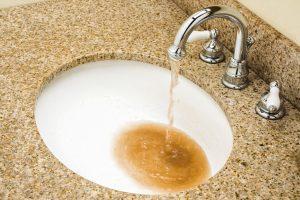 Tannins are decayed vegetation and other organic material that can get into well water and cause it to have a yellow or tea-like appearance. It’s not harmful, but it can cause staining.

Another major nuisance in many of the Great Lakes states of the Upper Mideast is hydrogen sulfide, which causes a rotten egg smell. Speicher says this kind of stinky water tends to be worst in Northwest Indiana, Southeast Michigan, and Northwest Ohio. He’s encountered homes where a sulfuric odor permeates from the ground.

“In some of the most severe cases, they have to put a pond system outside the house to let the smell aerate out the pond,” Speicher says. “Then they suck the water out of the pond and put a complete treatment system in the home so the water is usable for bathing and drinking.” 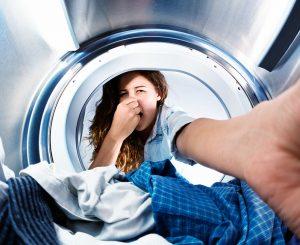 Hydrogen sulfide is an annoying problem, but isn’t harmful. Often, it’s the problems you can’t see, smell, or taste that pose health risks.

“People will have either cosmetic concerns or health concerns,” Degeneffe says. “Typically, homeowners aren’t aware of health risks until someone does well work or drills a new well and they test the water.”

Health risks from municipal water are possible, too. You can’t talk about water problems in the Great Lakes without bringing up the lead contamination of public water in Flint, Michigan. Speicher says the issue in Flint was that the city didn’t invest in properly treating the water.

“They have no more problems than most municipalities in the region, except they didn’t have the money to put polyphosphates in the water to keep the lead from leaching out,” he explains. “In Kalamazoo, Michigan, where I live, we have lead in the water, but we treat it with polyphosphates.”

Other potentially harmful water contaminants found in the Upper Midwest include arsenic and nitrates, which are also undetectable by human senses. An R.O. system is one of the best solutions for removing these contaminants from drinking water.

Want to Know for Sure? Have Your Water Tested

It is never our intention to cause alarm over water quality. In most cases, your water will be harmless, but there are steps you can take if you’d rather be safe than sorry.

“Municipal water and well water are generally safe to drink, but it’s never a bad idea to get a sample and have it tested by a state-certified lab,” says Selvig. “It will give you peace of mind, let you know if your water is safe, and help you make decisions about what water treatment solutions are best.”

“The biggest problem we run into is people failing to have their home’s water properly tested,” says Speicher. “And then, even if they do test the water, they don’t know the proper applications to use to get the desired result. Too many people want to do things as cheaply as possible, but we believe in doing it right.”